I’m still getting lots of questions about last month’s posts on fermenting vegetables at home. If you’re afraid to ferment your own produce, it’s likely because the technique is unfamiliar. I understand the hesitation: Fermentation involves so few ingredients and tools but so much time that you worry about messing it up.

Fortunately, fermenting has a long history, and it’s modern popularity is on the rise. This translates to lots of fabulous resources to help you become comfortable with fermenting fruits and vegetables. Here are some of my favorite sources for fermentation recipes and advice.
END_OF_DOCUMENT_TOKEN_TO_BE_REPLACED 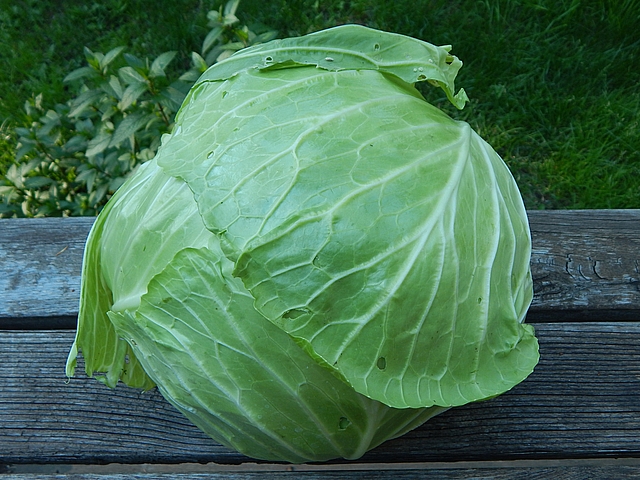 I have to admit that I’m a latecomer to the enjoyment of sauerkraut and other cabbage ferments and pickles. Perhaps it’s because I moved straight from a little kid eating processed hot dogs to a teenager refusing all meat—I’m not sure I’ve ever had a real sausage smothered in German sauerkraut. I’m not even a fan of coleslaw: it’s usually too heavy on the vinegar or the mayo and still fairly flavorless. It doesn’t help that for years I couldn’t grow brassicas without harvesting more cabbage moth larvae than edible cabbage leaves.

A couple of years ago, we mastered the cabbage moth problem, covering a hoop tunnel frame with mosquito netting and diligently clamping it down when we weren’t harvesting or weeding the broccoli, cauliflower, and cabbage protected beneath it. Once I started growing cabbage, I needed another way to deal with the enormous heads besides my favorite use: fresh, raw Asian Cabbage Salad. In discovering fermented cabbage, I learned that the variations developed around the world—from German sauerkraut to Korean kimchi—are as endless as they are for any other pickle.
END_OF_DOCUMENT_TOKEN_TO_BE_REPLACED

I’ve loved pickles since I was a kid. My mom put dozens of jars of dill and “sweet” (bread-and-butter) pickles through a water bath every year, and I’d sneak them like they were potato chips. But the longer the pickles sat, the less chip-like crunch they gave. Over the years, I’ve played with ingredients and canning techniques that have helped. Then I discovered fermentation.

Think about it: Cucumbers are best fresh and raw. Putting them in hot water is bound to affect their texture. Fermentation replaces heat with time and vinegar with salt. No wonder the result is crisper and fresher. And the flavoring possibilities—from dill to tea—are endless.

If you’ve never run a fermentation, I suggest you check out my introductory post from earlier this month. But here are the basics: Start with everything clean and fresh. Monitor the batch daily so that you can see the process. If you have doubts, give it the toss and start again.
END_OF_DOCUMENT_TOKEN_TO_BE_REPLACED

Fermentation is one of the oldest ways to preserve food, but it’s a technique that has become unfamiliar for modern home cooks. We still consume a lot of fermented foods, including dairy and grains, and we may even be brave enough to try those at home. But somehow fermenting vegetables seems daunting, raising doubts about whether we’re preserving or spoiling food.

Essentially, fermenting is souring via microbes. Microorganisms break down the sugars and carbohydrates in food, causing a chemical change that increases acidity and ultimately preserves the food. The process leaves no room for microbes that spoil food to move in. Properly fermented food looks, smells, and tastes bright, crisp, and tangy. A fermentation that has problems will be discolored, soft, and rotten smelling; you’ll turn up your nose before it even gets near your tongue.

Most people think of pickled cucumbers or brined cabbage when they think of fermented vegetables. But many other vegetables, and even some fruits, can be fermented. In most cases, the only ingredients needed are fresh produce, salt, and water.
END_OF_DOCUMENT_TOKEN_TO_BE_REPLACED

October: Pre-Order My Cookbook
I’m excited to officially announce that my first cookbook is coming out: The Complete Guide to Pickling. It’s packed with essential information and 125 flavorful recipes, including American classics and international flavors. Pre-orders are available now on Amazon.
Oct. 18: Pickling Book Launch
Locals: join me to celebrate my first cookbook, taste some of its recipes, listen to live music by Big Sky City Lights, and purchase signed copies of the book. Full details are here. (Please read them: there are some unusual aspects to this book launch to ensure everyone’s health and safety.)