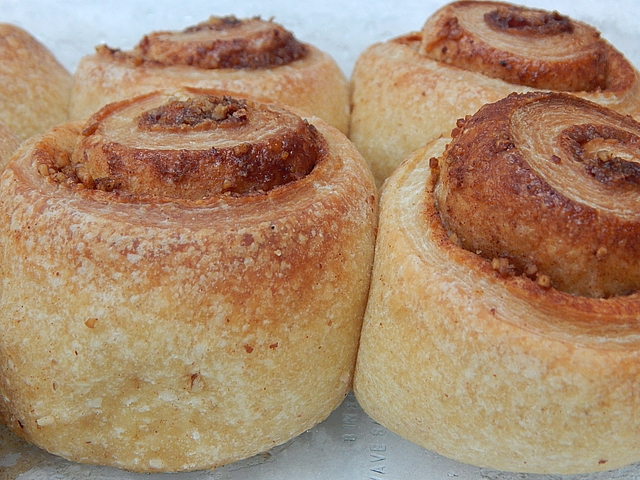 Last week’s Sourdough Brioche post evolved out of a desire to make this week’s recipe: Sourdough Cinnamon Rolls. I’ve long loved letting dough rise overnight to bake off for sweet breakfast buns. But I’ve had some failures. I once overloaded a bundt pan with balls of frozen bread dough to make my mom’s favorite buttterscotch roll recipe—only to wake up and find the dough balls dangling rather obscenely outside the pan.

Initially, my cinnamon roll recipe was also unappealing—but for its flavor, not its looks. The plan was to use pizza dough. I’d read about such conversions on various blogs and websites, with titles like Easiest Cinnamon Rolls Ever and Shortcut Cinnamon Rolls. My attempt resulted in spiral-wound, cinnamon-tinged… pizza crust.

So although a handy ball of pizza dough seems like an easy shortcut, you’re better off learning to make last week’s delicious Sourdough Brioche Dough. It won’t just turn into the best hamburger buns you’ve ever tasted; it will turn into breakfast buns that taste and feel like cinnamon rolls.
END_OF_DOCUMENT_TOKEN_TO_BE_REPLACED

Mar. 7: Free the Seeds!
Twice as Tasty will be back at the 5th annual Free the Seeds! fair at Flathead Valley Community College with the workshop Top to Root: Savoring It All. The entire event is free, including dozens of workshops and a giant seed swap and giveaway. Learn more here and see the full workshop schedule here.
Anytime: Mad about Sushi: Roll Your Own
Check out the newest Twice as Tasty workshop! It’s easier than you might think to roll your own sushi at home. Contact me to schedule your workshop.