If I could have only one garden, it would teem with herbs. Many of these easy-to-grow plants survive any climate or soil and are among the first shoots to appear each spring. Most are either perennials that return without fail or annuals that self-seed so readily one seed packet produces a perpetual crop. Herbs thrive on usage; the more you snip and pluck, the happier they become. Although the plants are rarely showy, a garden that contains herbs and edible flowers such as nasturtium, calendula, and viola is as delicious to look at as it is to harvest from.

Although fresh is best, herbs are easily saved for meals year-round. A little goes a long way, so even a couple of balcony pots will likely produce enough for use throughout the season. Many herb savers dehydrate their harvest, but some herbs, like chives, taste better when frozen.

1 handful fresh chives, or about 1/3 cup of stalks

Harvest the chives midmorning, after the stalks are no longer spotted with dew. Gather a handful of the stalks at the outside of the clump and use a pair of sharp scissors to cut the chives at least 1/2 inch above the soil line. If needed, rinse them under cool water to remove any soil and then roll them gently in a tea towel to dry. If using store-bought herbs, check to ensure they are still crisp and unbruised.

Clip any dried tops from the chives; remove any flowers, using the blossoms as a garnish on salads, soups, or pasta or saving them for an herb butter (see below). Spread the green stalks on a baking tray and place it in the freezer until completely frozen. Quickly transfer the chives to a zip-close freezer bag and seal, removing as much air as possible. Immediately return the chives to the freezer, where they will keep for several months. Use in recipes in the same quantities as you would fresh chives. Makes about 1/3 cup.

Compound butters were once limited to high-end French restaurants, but today chefs everywhere are serving them with everything from scones to fish. It’s easy to see why. Butter is no longer demonized, and patrons and staff are hooked: “[House-baked] cornbread, biscuits, and rolls…show up in a bread basket with house made strawberry preserves and a shallot-laced compound butter that’s so addictive…the staff has been calling ‘crack butter,’” wrote one reviewer about the honky-tonk–inspired Armadillo Palace in Houston.

There’s every reason for these butters to be staples in your kitchen too: Not only are they endlessly variable and easy to make, but they’re a fabulous way to preserve herbs. Butter is mixed with herbs or any other aromatic or seasoning and used to finish a sauce, garnish a meat or vegetable, or upgrade a dessert. Herb butter can be mixed on the spot, such as for Grilled Corn, or it can be refrigerated or even frozen.

Bring the butter to room temperature. Harvest and prepare the chives as you would for freezing. In a small bowl, cream the butter with a fork until it is smooth and pliable. Work in the herbs, lemon juice, and any other seasoning.

Form the compound butter into a log shape. Place on one edge of a piece of parchment paper, and then roll the paper around the butter, folding in the ends as you roll, until it is completely enclosed. Seal the exposed edges of the parchment paper with tape, place the roll in a zip-close freezer bag, and store it in the freezer for up to 6 months. To use, remove the roll from the bag, peel back one end of the paper, and slice the compound butter into 1/4-inch rounds. Makes 1/2 cup.

Like what you’ve learned here? Each month’s posts are wrapped up in a downloadable, printable PDF version that you can get delivered straight to your inbox by becoming a Twice as Tasty subscriber. You can also sign up to receive weekly email notification of the latest posts on the blog. Click here to subscribe. 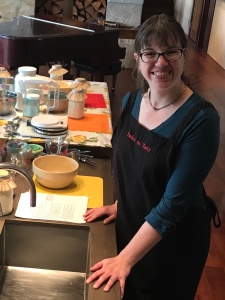 May 2020: Sourdough Giveaway
The sourdough giveaway is back! I’ll be continuing to give away my favorite bubbly—sourdough starter—all month; I can ship free sourdough starter to you anywhere in the world. More details are in this post.