Canning, jarring, putting up—depending on where you live, one of these terms likely comes to mind when you hear someone talk about preserving food. Once the domain of grandmothers with giant gardens and 4-Hers learning home-ec skills, recent years have seen a shift in the people processing at home. Eugenia Bone released Well-Preserved in 2009, sharing recipes developed in her New York apartment and designed to fill two to six jars at a time. Blogger Marisa McClellan launched Food in Jars, and her success and subsequent books helped popularize small-batch canning. Articles on home canning appeared in the Wall Street Journal and New York Times and on NPR, and Slate declared at-home preserving “ridiculously trendy.” Since then, the number of books, blogs, and people canning at home have only grown.

I love that a rising interest in eating well year-round has led more people to support farmer’s markets and CSAs, make meals from scratch, and save what’s in season for later use. The appeal of small-batch processing is understandable: Take your leftover fruit or veg and seal it in a couple of jars. The argument is that it’s a quick and easy way to preserve food.

The “couple of jars” part is where I disagree. By the time I prep my canning gear and the food item, heat a kettle of water, make a brine or jam, and finally process the batch, I want to pull the maximum number of jars from that kettle. Instead of going small, I recommend going big—at least big enough to maximize your yield while minimizing your effort and sometimes spreading out the work. 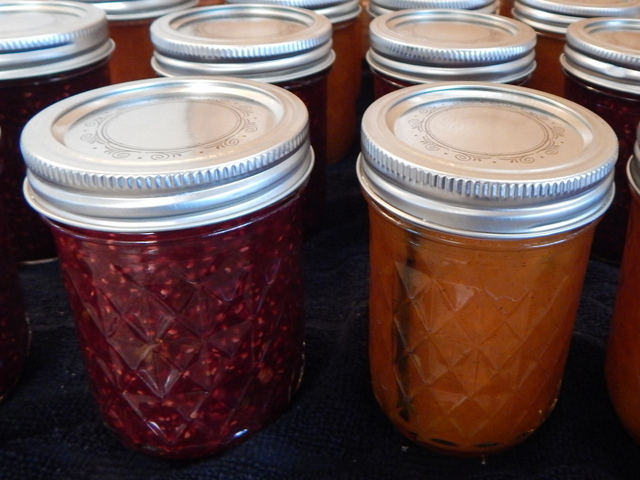 Because face it: Canning is work. Of all the methods for preserving food described on this blog, it requires the most specialized equipment and takes the most time. But the results are worth it. Canned food is shelf stable, lasts a long time, is easy to gift and share, and often can simply be opened and eaten.

When it comes to canning, I’m all about maximum flavor, and I want any additional effort I put into a jar of salsa or jam to be spent on its taste, not on setting up my equipment and cleaning up after two jars are at the stoveside. As you saw with my recipes for pickled snap beans and rhubarb marmalade, the proportions are designed for full batches. You’ll see a similar yield in the recipes I share this month. I’ve found that like a dishwasher, I and my canning kettle are most efficient when that kettle is full.

In short, I advocate full-batch canning—and even multiple batches when you find yourself in possession of a pasta sauce or salsa recipe so popular your family devours a jar a week. Instead of going small, put some thought into the adventure and make your canning session full and fun. Here’s how: 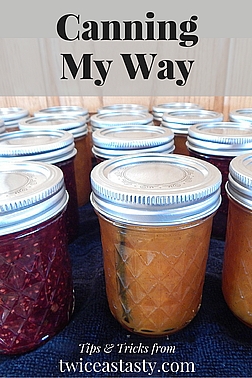 Still think small-batch canning is for you? Try this instead: Grab a few friends, each pick a recipe, and then plan a series of canning dates in one another’s kitchens. Eat some snacks, chat and prep, crank out a full batch, and then send everyone home with a couple of jars. At the end of the season, you’ll have had a fabulous time building up a full and varied pantry.

One of my favorite ways to maximize canning time is to make it Twice as Tasty. Sometimes, this means using the trimmings from one recipe as the base for another. Other times, it’s heat the canner once and process twice. That’s what the blog is all about, and that’s the focus of this month’s recipes.

If you loved Rhubarb-Rosemary Syrup and Rhubarb-Orange-Ginger Marmalade, you’re definitely going to be a fan of the syrup and jam I make with raspberries. Cherries are coming into season, and some of my favorite scones can be made with fresh fruit in summer and Tart Cherry Butter with Chai Spices in winter. I’ll also share a variation on a childhood cucumber pickle recipe—and a way to use that brine that doesn’t involve picklebacks. See you next week!

10 thoughts on “Canning My Way”