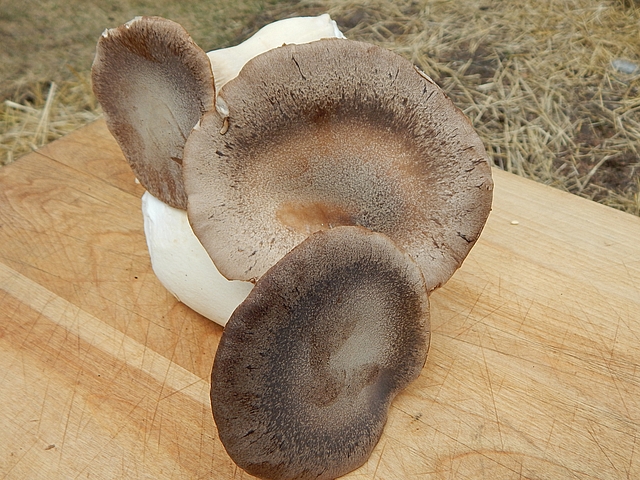 I have a confession: I often cook without recipes. Even when I use them, I alter this and change that to fit what’s in my cupboard and what I think I want to eat. And I rarely make a dish the same way twice. I mainly develop and write out recipes so that I can share my favorite foods more easily with you!

So almost every recipe on Twice as Tasty can be adapted and even free-formed. There are some exceptions: You’ll have greater success with sourdough baking and cheesemaking if you follow the recipe as closely as possible, particularly as you’re learning. For canning and fermenting for long-term storage, using the given ingredients and instructions ensures food safety. But when it comes to adapting dinners and other meals, you can typically use your judgment and experience in deciding how closely you’ll follow a recipe—like I did for my latest adaptation, Gluten-Free Cauliflower-Crust Pizza.

Some recipes may seem easier to adapt than others. Take our dinner last night: I had some lovely king trumpet and chestnut mushrooms from local grower Valleygirl Mushrooms that wanted to be used up. I also had mushroom stock, mushroom brine, and white wine brine left from my pickling experiments for the cookbook I’m writing; storage onions and garlic on the cusp of sprouting; and home-smoked Parmesan cheese from our latest cheese adventures. So I tied all of these into a risotto, loosely following the recipes for Squash–Mushroom Risotto and Fresh Improv Risotto. We ate like kings. 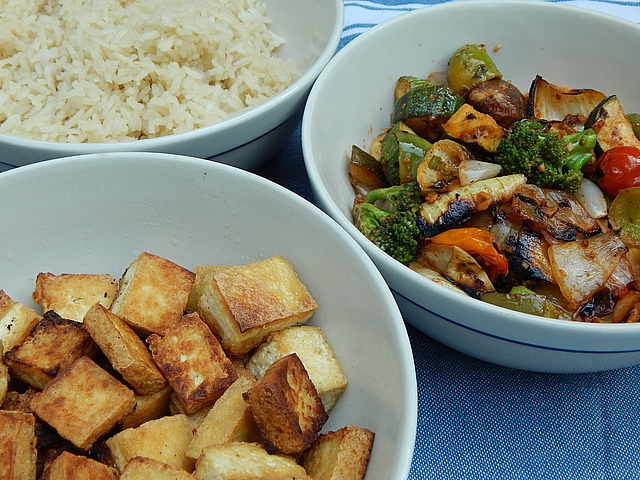 I emphasize the adaptability of many recipes already on the blog, often labeled “ratio,” “improv,” or “basic.” These recipes give you the ratios that I’ve found work best for a tasty meal, and they have ingredient suggestions, or a companion recipe, to get you started on turning them into your own creation. I prepare these with whatever’s at hand and encourage you to do the same:

The One Prep, Two Meal series started as a collection of tricks I use when my summer sailing schedule collides with harvesting and processing the garden. I quickly found I apply this mentality to many meals, year-round. These aren’t just leftovers; they’re two separate meals you create from similar base ingredients and freshen with new flavors: 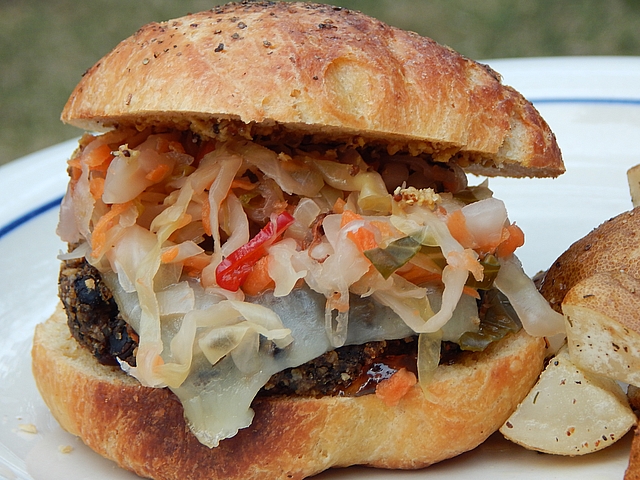 Cooking from whole ingredients lets you layer recipe upon recipe upon recipe. Take the veggie burger dinner I shared last weekend: It featured 4 Twice as Tasty recipes already on the blog, 2 new recipes that will be in my forthcoming pickling cookbook, and home-smoked cheese, a technique I’ll be blogging about later this year. And it came together in a snap, because I’d made each element in advance. I don’t deny that every recipe took time and effort. But the meal felt like a breeze to make because when we were hungry, everything was ready to go.

Not only was that meal easy to serve, but each layer was made in a large enough batch that we were enjoying them for days—Sourdough Brioche Buns for breakfast sandwiches, Black Bean Veggie Burgers crumbled on nachos, Apple–Red Onion Marmalade glazed on shrimp. These are some other recipes that I prep large batches of in advance and then turn into tasty, layered meals: 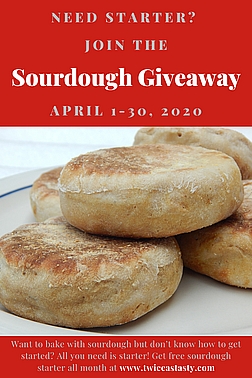 There are myriad ways to eat well and enjoy your kitchen time while staying home. With so many meals being made from the pantry these days, you’re probably buying larger volumes of ingredients that keep well. The goal is to use them in creative ways so that you don’t feel like you’re eating the same meal day in, day out. This goal has me plugging a key ingredient into Google and looking for inspiring recipes. You can do the same with a word search of the Twice as Tasty recipe index:

In line with the featured ingredient category, I have one more meal story and recipe to share from this week. One of the few vegetables I have little interest in is cauliflower—which means I never know what to do with it. I bought a head earlier this month to test in a pickle recipe, and the rest of it has been sitting in my fridge, getting rubbery and waiting to be used up. I looked at it a couple of days ago, remembered people asking about gluten-free vegetable-based pizza crusts, and decided it was time to try my hand at a cauliflower one.

I had a couple of recipes in mind, but neither quite fit my needs. My friend and keto-focused recipe developer Beth Lipton released a recipe earlier this month, but it called for frozen cauliflower, and presumably the bonus thickeners counteract wateriness after defrosting. She did have clever some baking tricks. Next, I dug out a recipe my mom had sent me from an unknown source. It used fresh cauliflower but just the florets, not my rubbery stalks. So I took some tips from one, some ratios from the other, and ended up with my first-ever cauliflower-crust pizza. I shared a photo that lit up my social media boards.

I now see why people are enamored of cauliflower pizza: it tastes like a plate of fried cheese. But more importantly, I see the story behind my recipe as a great example of what happens when you have a key ingredient you don’t know how to use, Web access, and a little creativity.

Ready to give it a try? Full details are in the recipe below, but here are the basics:
You need just 3 main ingredients plus some seasonings and toppings.
1. Finely chop and squeeze dry the cauliflower.
2. Mix it with cheese and egg.
3. Bake the crust.
4. Top, bake again, and enjoy.

Cut a piece of parchment paper slightly larger than a 10-inch cast-iron or other ovenproof skillet. Press the paper into the skillet until its base leaves a circular impression; set the parchment aside. Turn the oven to 425°F and set the skillet on the center rack to warm as the oven preheats.

Break apart the cauliflower, and then pulse it in a food processor until it forms couscous-like grains. Pile it in a clean tea towel and roll it up, twisting and squeezing over the sink to remove as much moisture as possible. Unroll, loosen the clump, and then reroll the towel and squeeze again.

In a medium mixing bowl, stir together the cheeses and egg. Mix in the cauliflower, salt, and onion and garlic powders. Drizzle olive oil in the circle you marked on the parchment paper, and then add the cauliflower mixture, evenly pressing it out to the same size as the circle. Carefully remove the hot skillet from oven, and lift the cauliflower-lined parchment into the skillet. Bake for about 20 minutes, until firm with golden bits of cheese. Remove the pan, and top the crust with sauce, toppings, and more cheese as desired. Return the pizza to oven and bake for 5 minutes, until the toppings are heated through and the cheese has melted. Serves 2.

Looking for a new food adventure? Round 2 of the Annual Sourdough Giveaway runs through April 30, 2020. Get your free sourdough starter here. If you aren’t ready to bake with sourdough but plan to try other recipes, be sure to join the Twice as Tasty Challenge by becoming a newsletter subscriber; click here to subscribe.

Appearances:
How to make quick-pickled jalapeños to add brightness and heat to any dish, with pickling expert Julie Laing Insider
Pie and a Connection to a Family’s Past Flathead Beacon
The 9 Best Fermentation Crocks in 2022, with Canning and Fermenting Expert Julie Laing The Spruce Eats
Being a Cookbook Writer with Pickling Expert Julie Laing Cookbook Love Podcast
The Science of Pickling Flathead Beacon
Battle Ground native knows how to pickle practically anything The Columbian
Local food blogger teaches cooking workshops The Daily Interlake
Grilled Tofu from The ‘Ohana Grill Cookbook Sugar + Shake

March 6: Pickling Your Garden, a free Zoom workshop
This Free the Seeds workshop will help you choose what to plant for the best pickles, introduce you to the basic science behind pickling, and show you how to customized your pickles to fit your produce and timeframe. It’s one of many workshop options over the weekend, along with a drive-by seed giveaway. Get full details here.
March 10: Pickling in the Flathead, a free workshop at Glacier Perks
Whether you garden to preserve your harvest or just enjoy fresh flavors in our short growing season, I have plenty of ideas to tantalize your taste buds. Join me at Glacier Perks in Lakeside for an evening of discussing and sampling recipes from my cookbook, The Complete Guide to Pickling. We’ll explore the many foods you can grow or buy locally to turn into pickles, relishes, salsas, beverages, and more.
Ongoing: This Situation Calls for Pickles
I’m excited to announce that my first cookbook is on sale! The Complete Guide to Pickling is packed with essential information and 125 flavorful recipes, including mealtime pickles that are ready in minutes, refrigerator pickles ideal for single-jar batches, fermented pickles big on flavor and crunch, and processed pickles perfect for long-term storage. Order your signed copy today.