A surprise project has me taking a break from preserving recipes this week: Waggoner Cruising Guide decided to publish a Twice as Tasty recipe. It’s online now and will appear in the annual guide and a cooking ebook next year. I’m so excited to share Twice as Tasty food with cruisers that this week’s post includes a paired recipe that I often make when we’re on the water.

The Waggoner Guide is considered the bible for Pacific Northwest cruising. It’s flagship tome, updated annually, has been guiding marine travelers for 25 years. You’d be hard-pressed to find a boater from the Puget Sound to Alaska who doesn’t have a copy.

For Waggoner, I chose a recipe that I make almost every time we spend a few days aboard a sailboat: potato bowls. This variation on stuffed baked potatoes doesn’t need an oven. They also fit my one prep, two meals plan, with extra potatoes rolling into a next-day salad with minimal effort. And some prep tricks make both dishes ideal for outdoor adventures.
END_OF_DOCUMENT_TOKEN_TO_BE_REPLACED 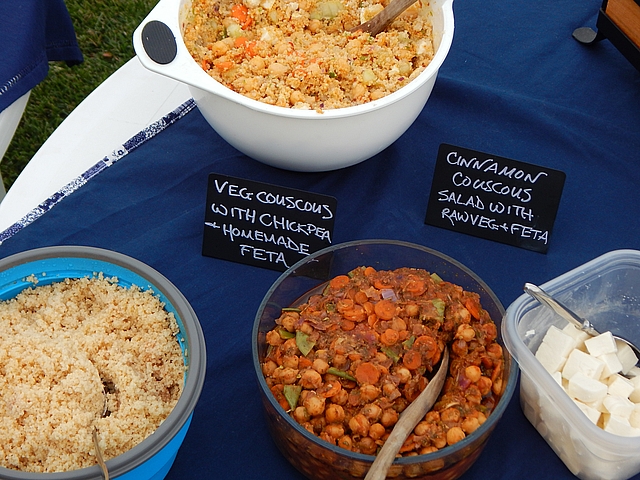 Hopefully you’ve been inspired by all of this month’s recipes to look beyond leftovers and use the one prep–two meals formula. If couscous isn’t a staple in your pantry, this week’s post may surprise you as much as risotto did last week. But once you try these recipes, you’ll stock up on couscous for plenty of quick, easy meals. Just as fresh pasta outshines dried in any meal, instant couscous can’t compete with semolina grains steamed in stages in a couscoussière. But for quick meals at home, in the woods, or on the water, it doesn’t get any easier than boiling water and pouring it over the couscous. Add some fresh veg and canned beans, and you have lunch and dinner ready in a snap.

Speed and ease are just two of the beauties of the recipes you’ll find here. As I shared with more than a dozen sailors in a workshop this week, the two recipes here can spawn many days of meals cooked in a galley or over a camp stove and grill: I always travel with several heads of preroasted garlic to serve on grilled pizza, sandwiches, and other meals. The extra half-batch of chermoula can be used as a shrimp marinade. Bonus cans of chickpeas can be mashed into hummus. Extra veg can be grilled or sliced for dinner sides or between-meal snacks. And homemade feta disappears so quickly into hungry mouths you could never travel with too much.
END_OF_DOCUMENT_TOKEN_TO_BE_REPLACED 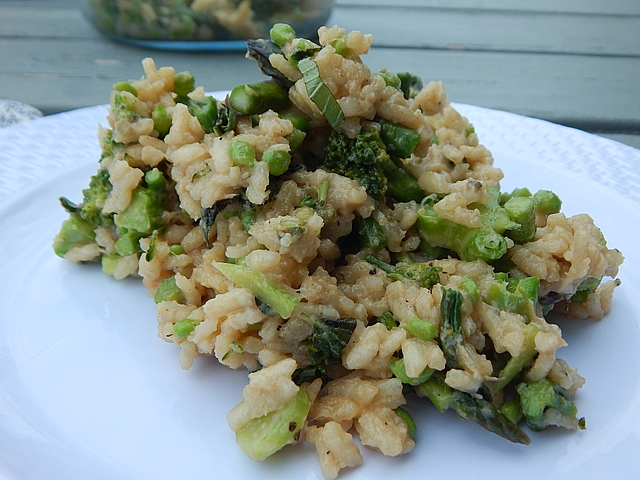 Risotto may seem like an unlikely candidate for the one prep–two meals formula: it has a reputation as a fancy meal that requires time and special care. But if you keep the right rice on hand and understand the basic technique, it simply becomes another fabulous way to stretch leftovers—and impress your friends at the same time.

These recipes build on the ratios given in Fresh Improv Risotto. So if you’ve already made versions of that recipe, or participated in one of my risotto workshops, familiarity will make your meals come together quite quickly. If you have yet to experiment with risotto, follow the recipes here and then check out the improv post for other risotto ingredient ideas.
END_OF_DOCUMENT_TOKEN_TO_BE_REPLACED 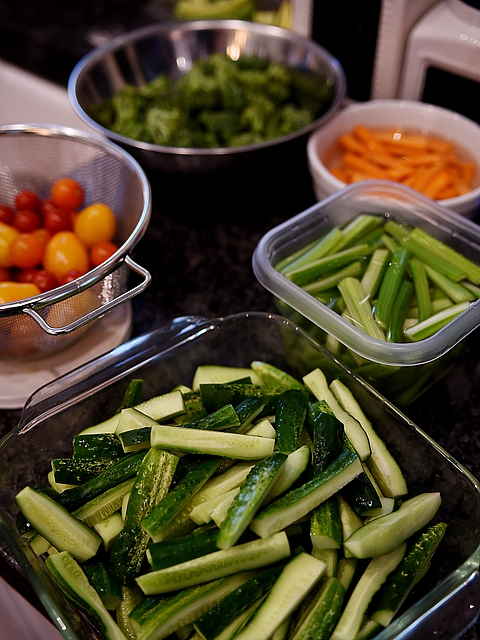 In my corner of northwest Montana, July 4 is the unofficial start to tourist season. The University of Montana’s Institute for Tourism and Recreation Research reported that more than 2.4 million people visited Montana last July—more than double the state’s population—and that half of those visitors entered Glacier National Park, Yellowstone, and a long list of other stops. Those numbers downshift quickly: By October, there are again more residents than visitors in the state.

Like these tourists, I try to cram as much as possible into this short summer season, both in the garden and on a sailboat. I’m harvesting and processing at least 3 times a week and sailing just as often. This requires some intensive scheduling and as many shortcuts in the kitchen as possible.

One of my key tricks is to prep once and eat twice. I’m not just talking leftovers, although I make plenty of oversize meals to reheat later in the week. Instead, my “one prep, two meals” plan creates two separate meals from similar base ingredients and freshens them with new flavors. It’s the easiest way I know of to avoid feeling like you’re eating the same meal day after day yet speed up later-meal processes.
END_OF_DOCUMENT_TOKEN_TO_BE_REPLACED

October: Pre-Order My Cookbook
I’m excited to officially announce that my first cookbook is coming out: The Complete Guide to Pickling. It’s packed with essential information and 125 flavorful recipes, including American classics and international flavors. Pre-orders are available now on Amazon.
Oct. 18: Pickling Book Launch
Locals: join me to celebrate my first cookbook, taste some of its recipes, listen to live music by Big Sky City Lights, and purchase signed copies of the book. Full details are here. (Please read them: there are some unusual aspects to this book launch to ensure everyone’s health and safety.)