When the first vegetables grow big enough to harvest from the garden, I’m usually focused on enjoying them raw and fresh: leafy greens and herbs, green onions and garlic, radishes and peas. But as the recipes I’ve shared this month have shown, you can think beyond salads, garnishes, and snacks and actually cook these vegetables, whether they’re wilted over pasta or baked into a quiche.

You may already serve some spring produce, like asparagus and rhubarb, hot and sizzling. But it may never have occurred to you to put the heat on other vegetables, like lettuces and radishes.

The Heat Is On 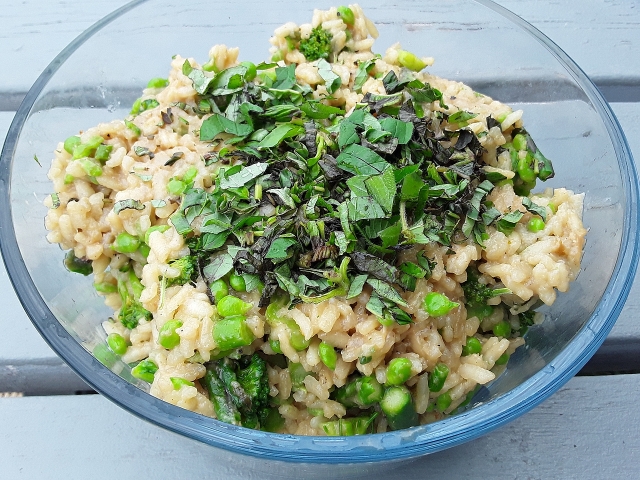 Once you start to look at a wider range of vegetables for pastas, stir-fries, and other dishes, you’ll be tempted to turn up the heat on many spring garden treats. Take care with that heat, though: Many delicate vegetables will reveal of their best flavors if they’re cooked quickly at a high temperature, whether it’s blanched, steamed, sautéed, grilled, or roasted. Err on the side of pulling them off the heat early, or add them at the end and letting residual heat spread through them.

These are just a few recipes that cook spring vegetables and are already on the blog; you can find more in the recipe index:

Save Some for Later

While you’re at the stove, think about saving some of your spring vegetables for later use. Some don’t even need the heat treatment before they’re quickly saved and stored. You can chop and immediately bag and freeze rhubarb for out-of-season desserts, and you can puree and freeze Spring Pesto with Pea Shoots to use as a sauce for pastas and sourdough pizzas. Even vegetables that should be cooked first, like asparagus, can then be pureed and frozen with minimal effort and later used in salad dressing, soup, and Fresh Improv Risotto.

For larger hauls of spring produce, it’s worth diving into pickling and canning with these recipes so that you can enjoy the spring flavors for weeks or months to come. These are just a few options: 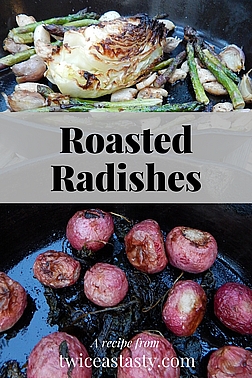 Quick-growing radishes are among the unlikely cooked spring vegetables. Despite being roots, they’re mainly seen as a salad component or fresh snack (you’ll even find radish pickles in my forthcoming cookbook). But radishes develop an entirely different flavor when you roast the roots and char their tops to crispy garnish. When soft and golden, the roots lose their characteristic zing and turn sweet. Both the roots and the tops have a taste reminiscent of brussels sprouts when roasted.

Cooking radishes can be as simple as sautéing them on the stovetop in a little butter and salt. But I like to slide them into the oven and roast them like potatoes for the fullest effect. In the oven, you can add the green tops to the pan and let them cook until they’re charred and crisp. Roasted radishes work as a side dish, or you can give the same treatment other vegetables for a main meal. It’s a great way to clean out the refrigerator. When I roasted radishes last night, I charred other odds-and-ends from the vegetable drawer in a second pan: a wedge of cabbage, asparagus spears, garlic cloves, walking onions, and even the last bit of a daikon radish left from testing a pickle recipe. With some grated Parmesan on top and Sourdough Pita Bread on the side, dinner was complete.

Ready to give it a try? Full details are in the recipe below, but here are the basics:
You just need some radishes and kitchen staples.
1. Clean the radishes and tops.
2. Toss them with oil and vinegar.
3. Roast and enjoy.

Preheat oven, with a small ovenproof skillet inside, to 450°F. Cut off the radish tops, and put the tops and roots in a bowl of cold water. Run your hands along the radishes, working free any dirt, and set them in a colander to drain. Swirl the greens in the water until they’re also free of dirt, and then let them drain in the colander.

Pat the radishes dry with a tea towel, and then cut them in halves or, if large, in quarters. In a small bowl, whisk together the oil, vinegar, salt, and pepper. Add the radishes and toss to coat.

It’s the last few days of the Sourdough Giveaway: Extended Edition, which runs through May 31, 2020. Get your free sourdough starter here.

4 thoughts on “From Garden to Oven”

Not a bad haul for a morning picking session. #itson #huckleberry #harvest #hucks #berrypicking #inthewoods #summervibes #twiceastastyblog #twiceastasty
I was lucky enough to review The 'Ohana Grill Cookbook for this week's blog post. We've been eating such tasty food while I've been trying out the recipes! (I'll be sharing one of my favorites next week.) Learn more about the book, and why you should pick up a copy, #ontheblog. #ohanagrillcookbook @adriennerobillard @sugarandshake #cookbookreview #grilledshrimp #homegrownveggies #hawaiianfood #grillmaster #twiceastastyblog #twiceastasty